Back to Blog
Chevy Bolt vs. Tesla Model 3: Which EV is right for you? 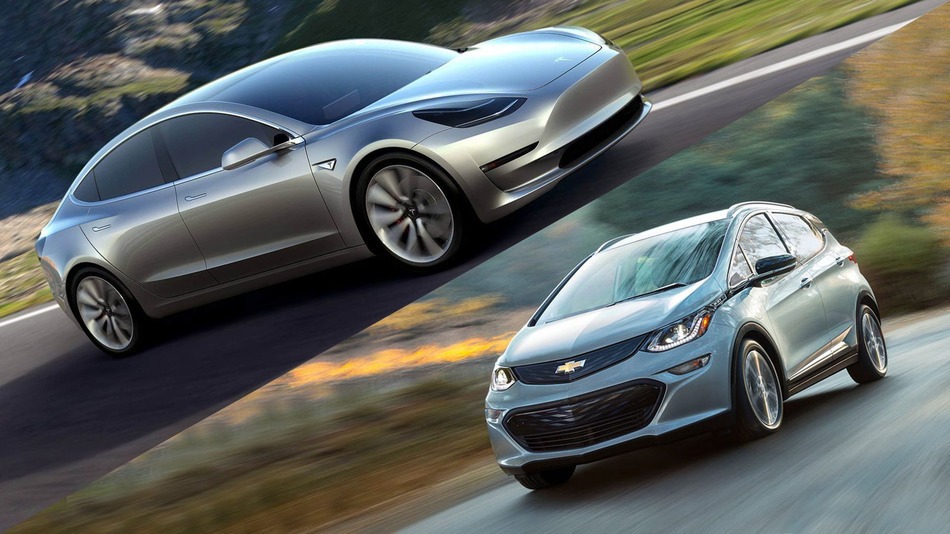 Let’s face facts, after Tesla’s huge week to the turn of 325,000+ Model 3 reservations it's no secret we are entering a new era in vehicular transportation. Many of those individuals who first plunked down the $1000 dollars did so without ever seeing the actual car, making a very strong statement that the market is finally ready to fully accept EVs.

Tesla, however, is not the only game in town and was beaten to the punch by General Motors. GM’s new fully-electric Chevy Bolt (not to be confused with the Volt, in an already confusing marketing faux pas) will launch nearly a year before the Model 3 and when we break down the numbers these to vehicles look to put a serious dent in the gas powered market.

Instead of discussing whether or not this is a good thing for the market, lets take a look at these two promising vehicles to find out which is the right one for you.

For those who suffer from range anxiety with their current EVs or those who think 40-60 miles of range just isn't quite enough to justify purchasing an EV you’re in luck, both vehicles boast a 200+ mile range. While numbers are not official yet and don’t forget range all depends on how you drive (just like gas), this is very good news for just about everyone. Tesla already recommends that the Models S and X be plugged in nightly and both those have 300+ miles of range, unless you’re taking the long-haul route everyday 200 is more than enough. The question is which is better? Well, currently Tesla claims its Model 3 is suitable for 215+ while GM only claims the Bolt at 200+ (although rumors are swirling it could go as high as 240+). Since we can only go off of the current claim the winner by a hair is the Model 3.

One would think that a company based in Silicon Valley and employing some of the best tech minds on the planet would be able to pull off some amazing features. You wouldn’t be wrong, the engineering feats of autopilot, and the falcon wing doors are truly amazing. However, anyone who has sat in a Model S knows there is a lot left to be desired. With autopilot an optional feature and the only thing really on the interior that was shown was a small 10in touch screen the Model 3 is actually missing a lot when compared to the Bolt. Chevy on the other hand went all out, not only do they match Tesla with the 10in touch screen they also built in 4G LTE wifi, and made it available with Apple CarPlay and andriodauto, allowing drivers to leverage a full set of apps directly from their phones. The Model 3 will have optional AWD but other than that the feature set is lacking. While Tesla has almost two years to up their offering, currently the hands down winner is Chevy.

This is where things are going to get a little more speculative as neither vehicle has been properly safety tested and many features for the Model 3 are only available for a slightly high price point. Looking at things as the stand right now its hard to judge a clear winner. Tesla will enable all Model 3’s with its amazing autopilot tech, allowing drivers additional safety although this feature is essentially behind a paywall as Tesla will turn on the feature for a few extra bucks. GM has remained relatively quiet on if the Bolt will have such a feature. Although, they have recently announced autopilot testing on the Volt and recently purchased the startup Cruise which worked on fairly advanced autopilot technology. While all this sounds great its certainly not as far along as Tesla which already has this tech out on the road. The Bolt does have automatic crash response and available blind-zone/pedestrian/collision warnings, but its just not the same as the car driving itself. The Bolt also gains a bit of ground due to the front wheel drive, but again for a little bit extra the Model 3 can be purchase in all-wheel drive. While there still is a lot more to find out about Safety from both in the near future, right now the slight advantage goes to Tesla.

At first glance you may think this category is cut and dry Tesla. Its true that the Model S carries a ton of street cred, thanks to some of the insane features that it boasts (0-60 in 2.9 seconds!), but the Bolt certainly looks like it has a number of surprises up its sleeve. GM has over 100 years of automotive history and while there has been plenty of ups and downs you simply can’t deny that they have they ability to make you say “wow”. Simply look to many of the newer Chevy models and how they are consistently beating their competition in features available and awards won. Even with all the good news coming from GM these days, it can’t really hold a candle to Tesla. Right now Tesla are, simply put, cool. Look at the styling of both vehicles, one looks a little like something James Bond would drive, the other looks like a space-aged economy car. Don’t get me wrong the Bolt looks good and there is no doubt its going to surprise a lot of people, but its hard to outpace Telsa here.

This is where marketing really makes its money, because both these numbers are slightly confusing. GM has aggressively marketed the Bolt as a sub-$30K vehicle after tax breaks, while Tesla has said all along the vehicle will cost $35K before said tax breaks. Both are being a bit underhanded here but it takes some digging to get to. While its true the $7,500 federal tax break will actually make the Model 3 the cheaper option it's doubtful many will actually be able to claim it. The government has capped the federal tax break at 200,000 units per manufacturer. While Tesla is only around 71,000 it plans to sell at least 70-80K more EVs before the Model 3 release. If that happens only a handful of the 325,000 per-orders will qualify. Based simply on base price however, Tesla is the winner by the narrowest of margins.

While both vehicles are coming in the very near future, with the Model 3 claiming to be ready by the end of 2017, one is already in full production and that’s the Bolt. Slated for an end of 2016 (that’s right THIS YEAR!) the Bolt is going to market first. This was an amazing surprise twist in the EV community. No one really expected GM to go all-in on electrics, let alone to ramp up so quickly. However, considering GMs long history in automotive manufacturing it shouldn’t really surprise anyone they were able to ramp things up so quick. Time will tell if the accelerated production was a rush job or just smart business, but for now GM has got a full year head start in the EV race.

This is actually incredibly close, both cars hit all the right sweet spots for the mainstream consumer. 200+ miles of range, $30K price range, plenty of safety, and great features make both cars compelling for the every man. Each car brings its own pluses and minuses to the table but the winner is clear, its you, the consumer. Look we can debate all day long which is a better buy, but the honest truth is we won’t really find that out until 2017 at the soonest. What is clear is that both of these vehicles look like great buys and the buyer is going to be extremely satisfied. Chevy and Tesla will certainly fight this out for the hearts of consumers, but in the end the real winner is you and I. We are the ones who get to drive these great vehicles and we are the ones who will benefit the most from the world auto market getting A LOT greener. Its the dawn of a new ear and I for one am excited to witness it.