Yes, Electric Cars Are Clean and Getting Cleaner 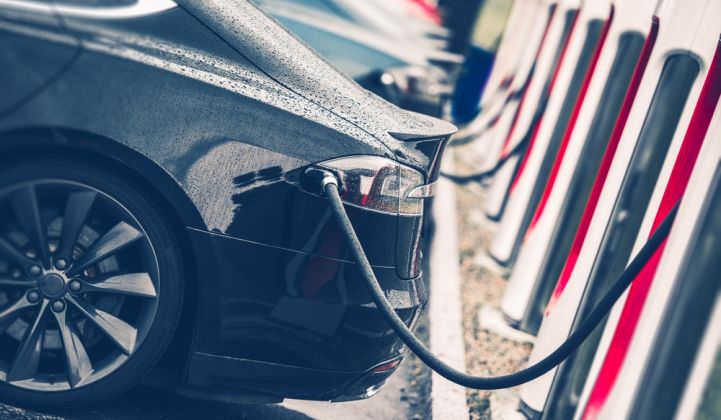 Electric cars get an extremely high volume of naysayers. Originally, electric cars were seen as slow, short-range, small and impractical. As each of these complaints have fallen by the wayside those same naysayers have scrambled to find some reason that electric cars should be put to pasture.

More recently they have settled on to a constant theme that electric vehicles simply are not green. Stating that because electricity comes from coal-fired plants electric cars are actually far worse for the environment. However, a quick glance at the facts provides are far more interesting conclusion. Electric cars are not only cleaner than traditional gas powered vehicles but they are only getting cleaner.

Electric Cars Have a Distinct Advantage, They Can Get Cleaner

The average electric car is now as clean as a traditional gas powered vehicle that gets 80 miles per gallon (Spoiler Alert: No gas powered car gets 80 mpg), and produces far less emissions than any gasoline-only car, according to a recent analysis of Environmental Protection Agency data, and they are only getting cleaner.

Its true that depending on where you get your electricity electric cars might not be all that green. Looking a little closer it easy to see a few things, one, electric cars are getting cleaner in part from efficiency gains, but more importantly they are getting greener thanks to a nationwide electricity mix increasingly infused with renewable power.

More and more of the country is now relying on clean energy as a prominent fuel source. Overall, coal accounts for 20 percent less power in the U.S. than it did a decade ago and is continuing to plummet. Meaning that the more time the goes on, the greener and cleaner electric cars get.

Back in 2009 the coastal states, which have the cleanest-running electric cars thanks to higher renewable energy mix, got an MPGe range of around 60 to 80 miles. States in the middle of the country however, had electricity that made electric cars only as clean as cars that got between 30 and 50 miles per gallon. By 2016 those numbers dramatically jumped where the average electric car nationwide was as clean as a car that gets 50 miles per gallon. The standouts being California and New York which average over 100 MPGe. 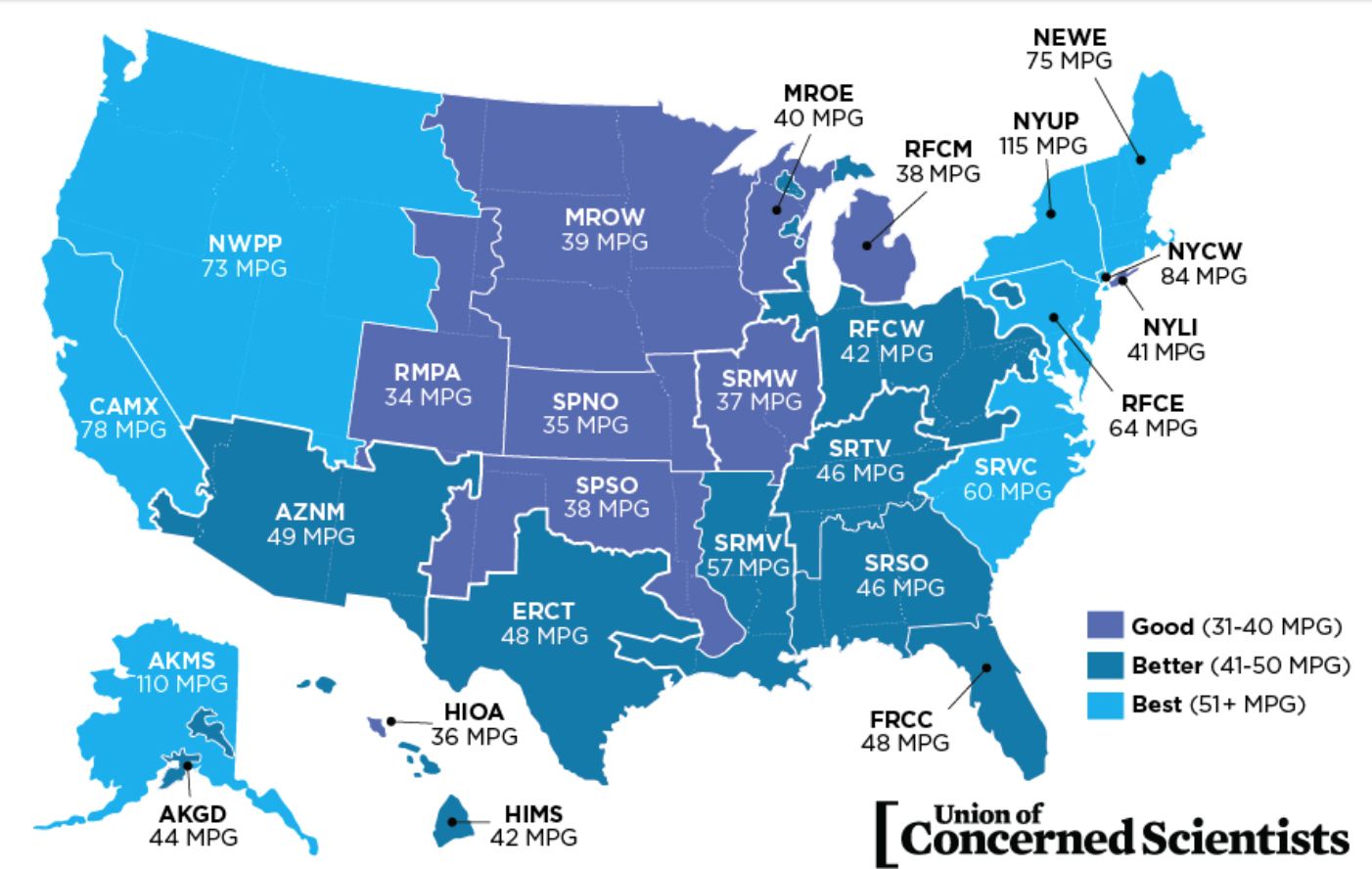 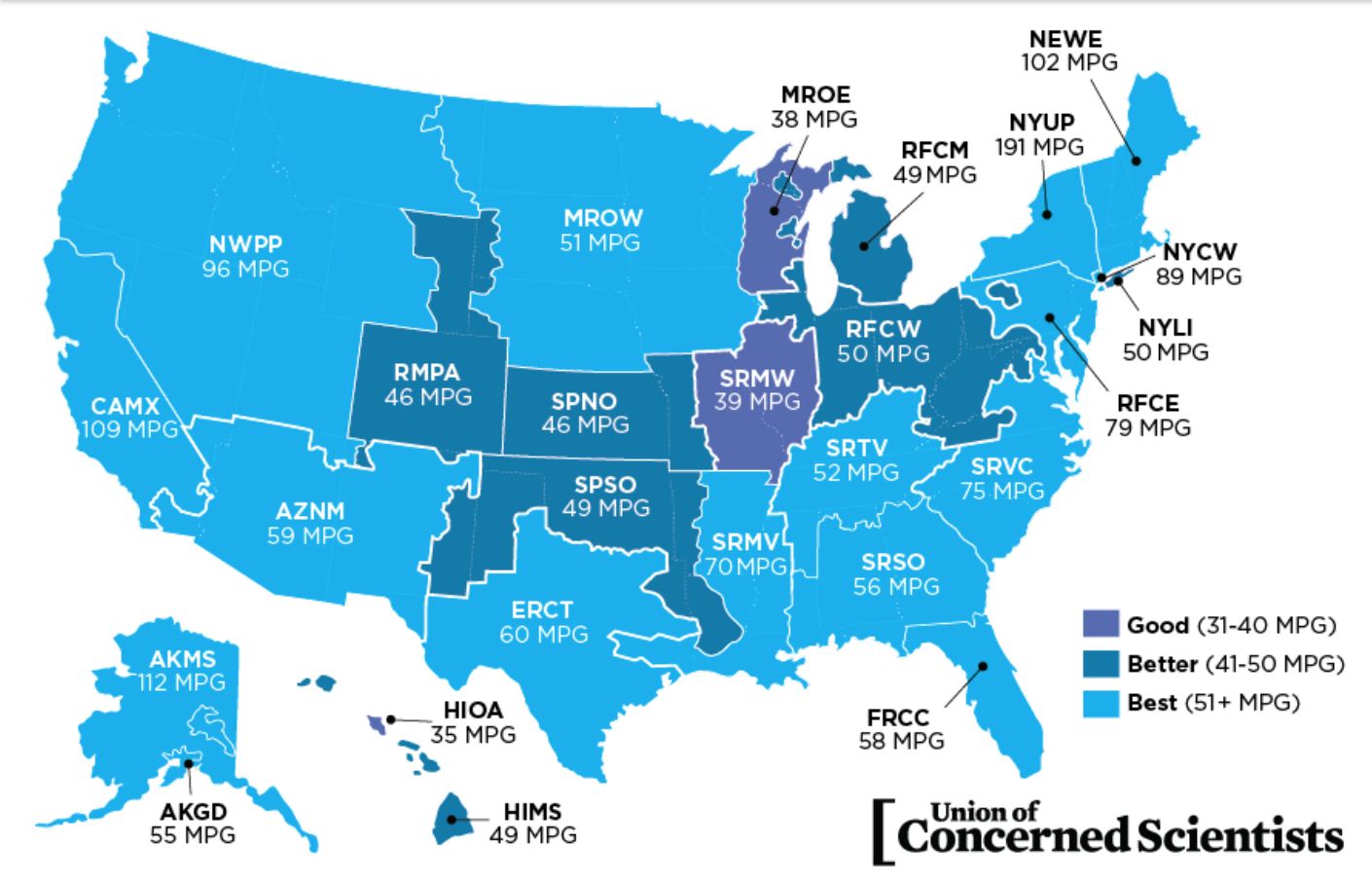 Last year hydro plants are the dominant source of renewable energy however wind and solar power made up nearly 10% of the national grid. However, due to the cost/kWh of wind and solar falling dramatically its predicted that they will overtake hydro in the next year.

Today 99% of people live in areas where electric cars emit less than a car that gets 50 miles per gallon and it'll only get better.

The progress is marked for high-efficiency electric vehicles. While the average electric vehicle is fairing well, the new generation of more efficient electric cars like Chevy Bolt, Tesla Model 3 and others, make the outlook even more positive. Using those vehicles, 99% of people live in areas where electric cars emit less than a car that gets 50 miles per gallon and it'll only get better.

With the combination of a cleaner grid and more efficient vehicles, electric cars are unquestionably the correct path for a greener future.