Back to Blog
How Do We Build A Nationwide Charging Network? 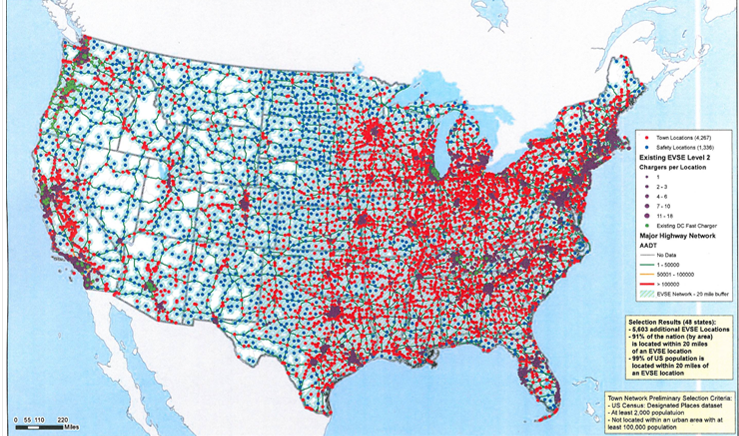 Charging is a necessity and a curse for the EV industry.

It's no secret that we aren't huge fans of a Level 2 public network (because you don't need one) but if we were to build out a public network what exactly would that require?

A public network needs to be made up of DC Fast chargers, period. The bottom-line here is that charging takes time and Level 2 chargers (the most common and affordable type of charger) is better suited for in-home or at work scenarios where cars are parked 4+ hours every day. A public Level 2 network doesn't work simply because wait times are too long, cars will stack up, and the end-user experience is terrible. Most drivers need to charge between 2-4 hours daily on Level 2 chargers (EverCharge has charged over 1M miles nationwide, this reflects the average of all daily charge events), can you imagine having to wait around for 2 hours every day to charge? It just doesn't make sense.

DC Fast chargers like Tesla's Supercharger network cut the time down significantly, filling 80% of the battery in ~30 minutes. This means most will only have to charge once a week and while it's not ideal (being able to charge up overnight at home is the preferred solution, just ask Tesla) it's far better than public Level 2 stations. The main drawback is these stations require a lot of power and installing in large urban environments is extremely difficult, meaning these stations have to reside on the outskirts of town. Getting enough power might be a nuisance, but paying for it is the real issue.

Building out a nationwide network isn't cheap, Tesla has invested hundreds of millions of dollars in the Supercharger network and has roughly 3,600 chargers worldwide. In order to build out a large-scale network, billions of dollars will need to be invested before 95% of the nation is covered.

The Question Is Who Pays For It?

Currently, a mishmash of startup and established companies have taken a stab at building out the correct infrastructure and come up with ~35,000 Level 2 stations and ~5,000 DC Fast stations nationwide. Meaning there is one DC fast station for every 110 vehicles, it doesn't take a math whiz to see that this is nowhere near enough. The question is who will invest the necessary capital?

Lucky for us we have an answer: Volkswagen. Due to the dieselgate scandal, CARB and the EPA were in a prime bargaining position and leveraged it to the hilt. In addition to the billions being paid out to VW drivers for the scam, $2 Billion is earmarked to build out a nationwide charging network. Making this larger than every investment into charging infrastructure to date combined. This may be a great start but we are missing one more key to bringing everything together and that's intelligent charging stations.

Intelligent stations allow for the efficient use of power and by using power more efficiently we can install more stations for less money (this is something EverCharge knows a thing or two about). Each DC Fast station uses between 100 - 120 kW of power requiring ~1000 kW for every 10 stations. Dumb charging stations simply block off 100 - 120 kW whether they are in use or not. Meaning no matter if the power is being used the capacity for stations maxes out at 10. Intelligent stations instead pull from the larger reservoir, allowing for a more dynamic use of power.

Using an intelligent system (like EverCharge) the station can take into account a few variables to divert power to where and when it's needed most. Variables like how much power is needed, driver charging habits, and the state of charge (as lithium-ion batteries approach 100% they accept less power) can vastly improve charging sites. By understanding these variables the system can move power around as needed increasing the efficiency and, in short, allow for more chargers to be installed without any additional power infrastructure keeping costs low. By using intelligent chargers that $2B investment will stretch a long way and realistically be able to cover far more drivers. If a public network is going to succeed intelligent chargers are a must.

We are sitting at the dawn of a brand new form of vehicluar transport and its essential we get this right the first time, otherwise we may end up stuck in the past for a very long time.