If you live in Atlanta, Chicago, Los Angeles, Oakland, Portland, Miami, New York, San Diego, San Francisco, San Jose or Seattle you're bound to have noticed a surge in electric vehicles on the road.

With 24 plug-ins now available from multiple manufacturers, plug-ins accounted for nearly 4% of vehicles on the road in 2014, with Tesla alone selling just shy of 20,000 vehicles. What's more, with the announcement of the exciting all-wheel drive Model S and forthcoming Model X, Tesla will reach new markets and aims to build 100,000 cars in 2015.

As the Diffusion of Innovations details, emerging technologies go through phases in adoption. America is now exiting out of the ‘Innovators‘ phase and into the ’Early Adopters’ phase in Electric Vehicles. Until now, only people that could work an electric vehicle into their existing lifestyle made the switch. People who have easy access to charging, most likely via their own private garage and power source, have been the primary purchasers.

Tesla has been very open about its plans to build an electric car around the $40,000 price point, essentially opening up its demographic by an order of magnitude. The California Air Resources Board has also publicly stated that by 2040, every single new car will be zero emission; meaning, either electric or fuel cell. (Probably won’t be the latter, see why Mr. Musk believes hydrogen isn’t the answer)

If Tesla and other manufacturers want to start selling more EVs, they have to start addressing a massive demographic that has been overlooked; residents of Multi-Tenant Buildings, also referred to as Multi Dwelling Units (MDUs). This designation includes condominiums, town homes, apartments, and mobile homes. In San Diego, 51% of residents fall into this category. In California overall, it is just shy of 39%. Most of these residents park in a large covered or uncovered lot, parking garage, or some other communal situation. Nearly half of the urban EV market is being ignored. Ironically, this high density market is where EVs are catching on, too. So, you have more potential buyers with less practical means of charging.

Some charging companies out there think they have a solution. They say, ’Let’s put a few public chargers nearby or on the property, that will solve the problem!’

If I have my own parking space at my condo or apartment, I want to park in it everyday. I don’t want to come home, cross my fingers that nobody else is using one of the public chargers, and then walk to my place with groceries and get yelled at to move my car for the next resident later on.

What happens after 5 EVs are on the property? What about 10, and 20, and 100? Publicly available charging may kind-of work for a handful of EVs, but after that, there just isn’t enough charging to go around. Simply put, it's not scalable.

Current public charging systems are absurdly expensive. I recently spoke to one business owner who paid $16,000 to install one at his office. It can charge 2 cars simultaneously. I counted 6 Teslas in the parking lot. Hmmm’ seems like there is not enough to go around.

Alright, so public charging isn’t the answer. Then what are the other options? Well’

You could run an extension cord from your car...

Across your parking lot, over your yard, and into your home. Of course, this would only be a 110V line, meaning you will get a whopping 1-3 miles of charging per hour. You can probably last a few days before someone complains that this is either a hazard or any eyesore:

This is an actual extension cord running from an EV into a resident’s house.

You could luck out, and find an outlet right next to your car.

But the problem is that the outlet isn’t connected to your meter, so you don’t pay for the power and are essentially stealing from the community. How long can that work? 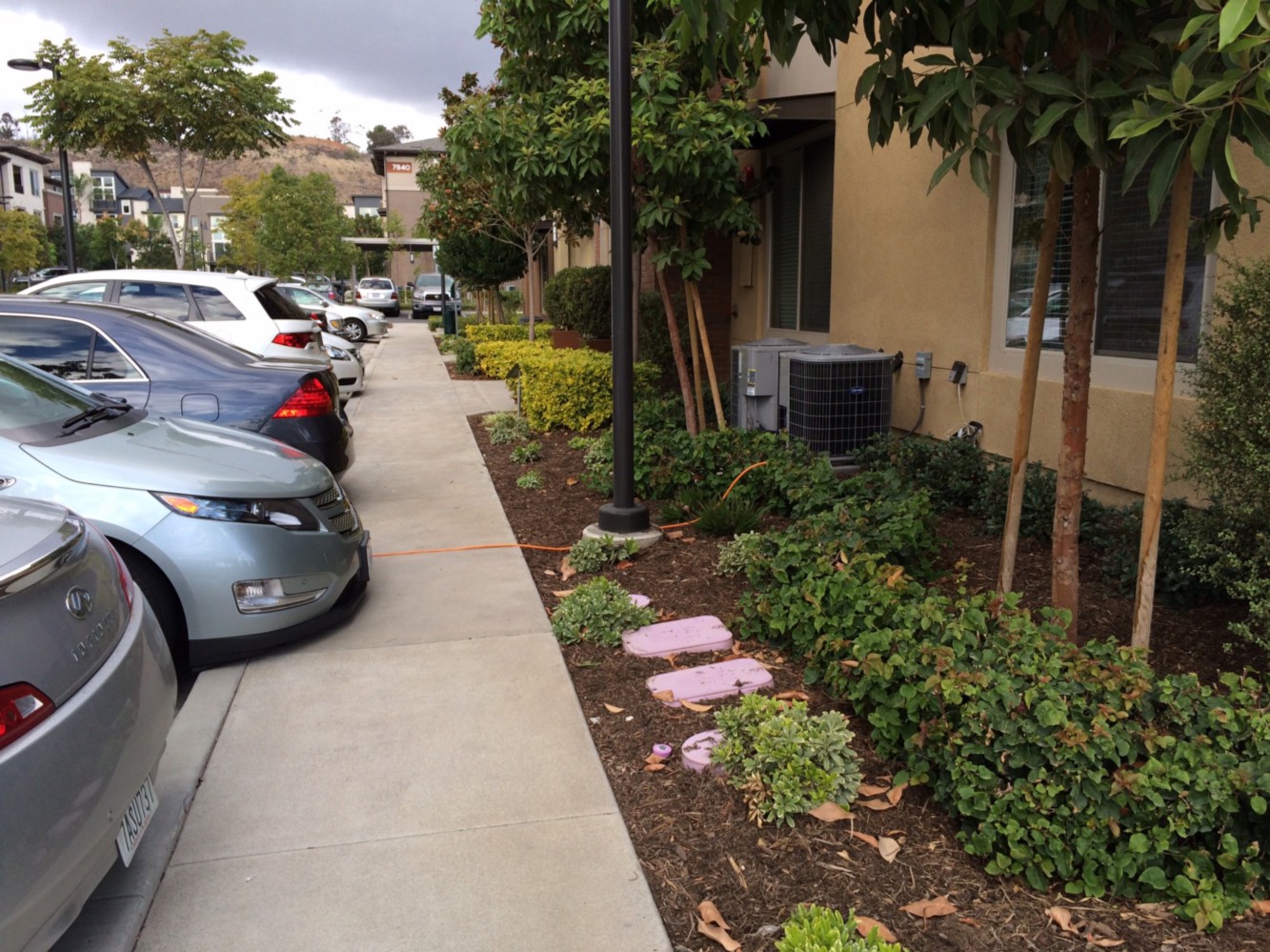 Plugging into an available outlet.

You could call up an electrician, and instruct him to run a line from your own power meter to your parking spot.

Of course, this would not work for renters. For homeowners, this can work in theory, but we often see situations where a resident’s meter is 500 feet and 6 walls away from their spot. This means it is incredibly expensive for an installation. Furthermore, the parking area will look like a bowl of spaghetti (conduit running every which way) if more residents decided to go this route.

Complicated layouts make for a mess of conduit.

You could run a line to the house panel.

(The panel for the common area lights, doors, etc. The HOA or building owner usually pays for this.) However, there is often only capacity for 2-3 vehicles before making massive infrastructure upgrades. Recently, we met with a 400 unit California building that had allowed 3 Tesla owners to run lines to the house panel. Everything was fine until the 4th Tesla showed up, and received the unfortunate news that it would be $30,000 to upgrade the infrastructure to allow for the additional car. Had they gone with EverCharge, they would have been able to support 18-30 EVs before they needed to upgrade.

The reality is that EV charging takes a massive amount of electricity. 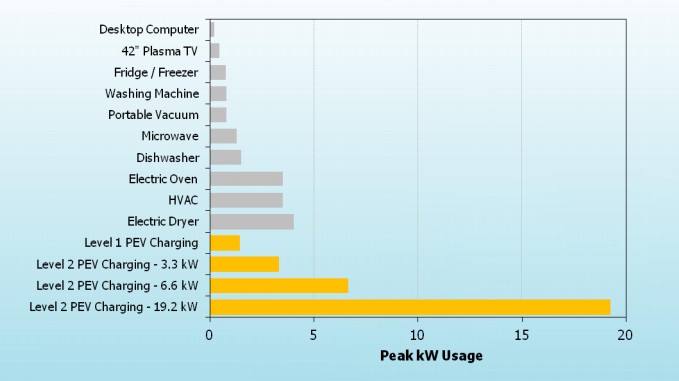 Simultaneously, the amount of electricity entering a building or property is finite, so how do you ensure that all residents have the power that they need without overtaxing the system and tripping breakers all day long?

Enter EverCharge. EverCharge makes the most sense from the first vehicle to the 500th, most notably because of scalability.

The charging stations are installed directly in residents' dedicated parking spaces for their exclusive use so they don't need to worry about where they will plug in at night. The proprietary system communicates wirelessly to expand the capacity of a property by a factor of up to 10 times. The technology intelligently allocates the available power to requesting vehicles maximizing the infrastructure potential, enabling buildings to support many more vehicles before costly upgrades are required.

California Civil Code Section 1352?’?1353.9 protects homeowners by forbidding HOAs from denying a resident’s request to install charging. The HOA doesn’t have to pay for the system, but they can’t disallow it. This same law has some requirements, though. Chiefly, a $1,000,000 insurance policy has to be in order. With EverCharge that policy is included.

EverCharge keeps track of the power that a resident uses, bills them accordingly and reimburses the HOA or building owner automatically, so that they aren’t paying for a resident’s power. Let’s call it a win-win-win-win because EV owners get power, auto manufacturers sell more EVs, greenhouse gases are reduced, and HOAs/building owners don’t have to worry about the logistics. 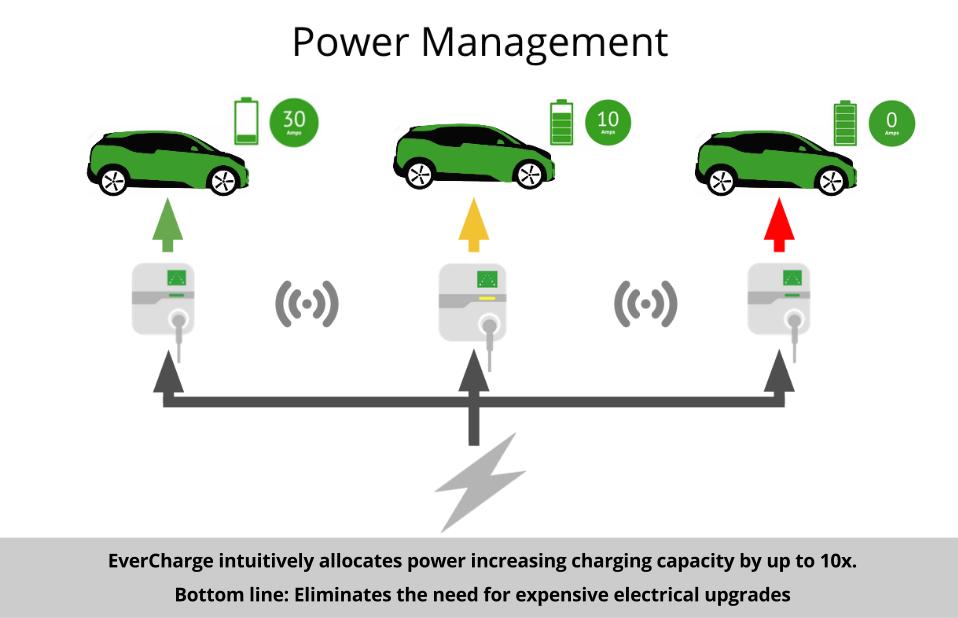 A bright future lies ahead for EVs. But, it won’t come without many issues to address. EverCharge decreases the barriers to go electric for a significant portion of the population.